Every structure tells a story. For historic buildings and monuments, every brick and every layer of paint is like a record of the past.

But through the years, these records sometimes come under threat. Factors such as weather, frequent usage or simply the passage of time contribute to wear and tear on all kinds of buildings.

In the case of old and important structures, restoration can be a critical part of preserving history. Restoration, specifically historical building restoration, is the process of returning a building to its original condition. When a special landmark is in need of a tune-up, skilled craft professionals such as masons, carpenters and painters are called in to repair old fixtures, replace internal structures and repaint exterior coatings to ensure the site is in good shape and prepared to last for many more years to come.

Historical building restoration is an interesting and unique segment of the construction industry, and these types of projects are all around us. Here are three historical restoration projects that you need to know.

The Statue of Liberty 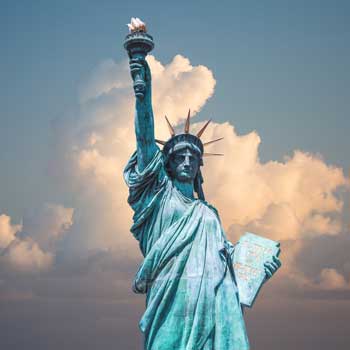 For a few years during the 1980s, tourists in New York saw the Statue of Liberty surrounded by scaffolding. Perhaps some even witnessed a huge crane remove Lady Liberty’s torch in preparation for its replacement. These were just a few of the steps professionals took when the Statue of Liberty underwent refurbishment.

Tackling its first restoration, the Statue of Liberty needed an army of craft professionals on the job as the iconic symbol had faced almost a century of weather, pollution and sightseeing. A team of French and American architects, engineers and several other construction specialists worked on the project.

Work included repairing the crown, repainting, and replacing the statue’s internal skeleton with stainless steel bars. In addition, the project also included the installation of new elevators and an informative exhibit located at the base of the statue.

One of the most significant changes was to the Lady Liberty’s torch. Made of copper and gold to shine bright, the torch piece had been severely damaged by water and had to be removed and replaced with a new exact replica. Now, the original 3,600-pound torch is stored in the new Statue of Liberty Museum.

One of the most widely broadcasted restoration projects, the completion of the statue’s restoration was celebrated with a four-day event called Liberty Weekend around the Fourth of July in 1984, reaching 1.5 billion people in 51 countries.

More than 150 years old, the United States Capitol Dome is one of the most recognizable structures in the world. Completed during the Civil War, it is constructed of cast iron and represents one of the most famous landmarks in America. With the last notable exterior restoration occurring in the 1960s, the Dome started to deteriorate and rust.

Utilizing over 75,000 pieces of equipment and 1.1 million pounds of scaffold, construction craft professionals prepared for the project with a goal of completing the restoration by 2017. 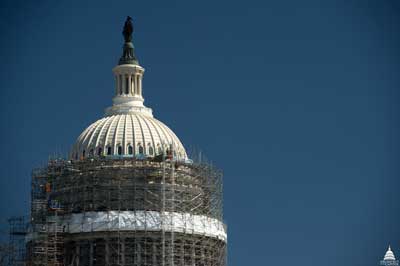 Photo credit: Architect of the Capitol

“The Dome was in dire need of repair and with the help and leadership of Congress, we repaired more than 1,300 cracks and deficiencies in the cast iron. We repaired or recast intricate ornaments, gutters and balustrades. The team used both innovative technology and historical tradecrafts to repair the Dome. Our work revealed and preserved exquisite craftsmanship that went into the construction of the Dome. We removed hazardous materials, upgraded electrical and mechanical systems and finally, repainted the Rotunda and the Dome,” said Stephen T. Ayers, architect of the Capitol.

Housing nearly 2 million people annually, the Capitol can welcome visitors with a fresh coat of paint and other repairs thanks to the hard work and dedication of craft professionals.

It was in Independence Hall, located in Philadelphia, Pennsylvania, that the Declaration of Independence was signed in 1776.

Originally known as the Pennsylvania State House, there have since been a series of restorations, including the name change, to ensure its upkeep as a public shrine in Independence National Historic Park.

Originally built without the tower and steeple, these two additions were made around 1750, but rotted years later. Incorporating the clock and additional ornamentation, architect William Strickland restored the steeple in the 1800s, over 175 years ago.

Most recently, the tower underwent a 14-month restoration project funded under the American Recovery and Reinvestment Act. Combining the skills from professionals in carpentry, masonry and other crafts, these individuals worked to stop and correct the decay of the tower’s exterior.

To allow visitors to experience the beauty of the tower during construction, the exterior was covered in a detailed fabric displaying drawings of the north and south sides of the building’s architecture. Meanwhile, on the inside, craft professionals were painting window frames, replacing damaged brick masonry and reinforcing the clock face for the reveal of its final completion in 2012.

From national symbols to local icons, there are numerous United States monuments and other buildings worldwide that need craft professionals to perform restoration projects.

“It’s like being an archaeologist – peeling away the layers of paint and discovering the original decoration and the wonderful craftsmanship of the past, and then trying to replicate that,” said John Canning, a decorative painter focused on historic preservation.

Utilizing different skill sets, restoration projects provide a unique opportunity for construction to build the future while admiring and protecting the past.