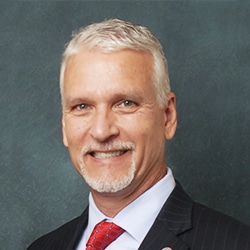 At just 17 years old, Perry began looking for work as a roofer, as he had experience in the craft. As a young professional, he relied on his salesmanship and soft skills to win the trust of a contractor who gave him work. During his time as a roofing contractor in his gap year, he found himself intrigued by the industry and his passion grew. It was during this pivotal year that he decided he wanted to make roofing his career.

Three years later, at 20 years old, Perry had become a successful contractor with 12 employees working for him. His parents, who initially wanted him to go to college, began to understand and respect the vast opportunities within the construction industry. Thus Perry Roofing Contractors was founded, and Perry became a small business owner in Florida.

As a business owner, Perry had to wear many hats and quickly discover all the different facets of business. From human resources to estimating to sales to marketing, he had to learn how to run his business and manage a workforce – all while under 21 years old. This critical experience helped Perry learn about the importance of small business in the construction industry.

During the company’s infancy, it focused on residential roofs in the Gainesville area. However, as the company grew over the years, it gained more experience with commercial buildings and eventually completed projects with schools, industrial buildings and a Veterans Affairs Hospital.

Through over 40 years of service, Perry Roofing has grown exponentially in the hands of Perry’s leadership. Now, with offices in Gainesville, Jacksonville, and Orlando and almost 130 employees, the company services a large portion of North and Central Florida.

In addition, Perry has been able to support charitable organizations such as Habitat for Humanity and the YMCA through servicing their projects and providing roofing.

“Anytime there are opportunities to help a charitable organization, our success has allowed us to give back to the community in a pretty substantial way,” Perry said.

From Roofer to Senator

Even 30 years into being a successful contractor and business owner, Perry still had a career shift ahead of him. Around 2010, he was approached by the sitting state senator who took Perry to lunch and asked him to run for office.

Perry was flattered but rejected the invitation. At the time, he had two young daughters and a struggling business during the housing crisis. With no political background and his hands full, he wasn’t interested in such an undertaking.

Though he said no, the idea continued to run in Perry’s mind. The more he thought about, he realized that the initial reasons that prevented him from running were the very reasons that made him the perfect candidate. He had a thorough understanding of what small business owners face, he was affected by the housing crisis, he understood the business climate and he had daughters that he wanted to make the world better for. After realizing he had the power to make changes in his local community, he ran for the Senate and won a seat in 2010.

For the past 10 years, Perry has remained president of Perry Roofing Contractors and served in the Senate. Without a college degree, Perry credits a lot of his success to his business background that was provided to him through the construction industry.

“I have a high school education and yet I’ve afforded a lifestyle that has been very successful for me. It gets back to desire and work ethic, but if you have those, it’s unlimited what you can accomplish,” Perry said.