Sean Ray has been in the construction industry for more than 25 years. Getting started in the industry as a pipefitter’s helper, he eventually became a journeyman before rising in the ranks as a foreman, superintendent, manager and eventually reaching his current position of director of craft workforce development for Sundt Construction, based in Arizona.

But before construction, Ray was in the military. Wanting to travel beyond his small hometown and earn some money before starting college, he joined the United States Navy out of high school, where he served as a sonar technician aboard a Navy cruiser. In between shifts scanning for submarines, Ray helped with maintenance of the sonar dome, honing technical skills which would soon aid him in his career as a pipefitter. 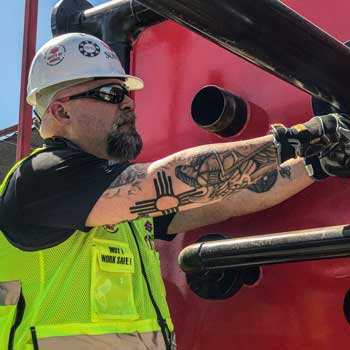 After his service time, Ray expected to use his GI Bill benefits and go to college. But before school started, a friend’s connection led to Ray working for a piping contractor for six months to make a bit of extra money – work he enjoyed so much that it ended up becoming his career.

“Those six months went by really fast, and I decided to put off college for another year to save up some more money,” said Ray. “Next thing you know, I didn’t go back to do any college until I was 40.”

Having worked and risen in the industry for more than two decades, Ray has found that his experience in the military has aided him time and time again in construction, since he first became a pipefitter to his role now in helping develop the future workforce.

“I think that construction aligns very well with the military,” said Ray.

According to Sean Ray, here are some of the key skills learned in the military that veterans can apply to a career in construction.

While in the military, servicemen and women learn and put into action a number of technical skills, from using power tools to firefighting to correct use of personal protective equipment (PPE).

Working with various equipment, instruments and electronics while pitching in on assembly, maintenance and repair gives military members experience working with their hands as well as familiarity with complex systems and reading schematics – all skills than can make transitioning to construction easier.

Different roles within the military can also teach more specific technical skills. For Ray, his time as a sonar technician introduced him to things like heating and cooling systems and different types of pipefitting.

“The petty officer that was in charge of my area started teaching me about screw pipe, tubing, the different parts of it, and that’s where I first got my hands involved with piping,” said Ray.

For veterans interested in pursuing a career in construction, the technical skills learned in the military can help you earn free industry-recognized credentials from NCCER through the Hard Hat Heroes initiative. To see how your military occupational specialties are aligned with NCCER training, visit veterans.byf.org.

One of the most special takeaways from the military for many veterans is the comradery and sense of family that gets built within a team.

No matter whether the mission is protecting a convoy, capturing an objective or keeping a ship afloat, working together toward a common goal is critical for success in the military.

So too is the case in construction. On building projects of all sizes, it involves numerous skilled craft professionals all coordinating, communicating and executing a complex plan together.

Spending lots of time together on job sites – some projects taking months or even years to fully complete – develops a special bond between crew members.

“I honestly and truly found that brotherhood feeling again,” Ray said of when he first got started in construction. “There were like-minded people, they were intelligent, willing to teach me, and I kind of fell right in.”

For veterans looking to find a family like the one they found in the military, the lifestyle and culture of the construction industry might be a great option to explore.

Waking up early. Being on time. Working hard for your full shift. Traveling and living in new environments. Being organized. Taking responsibility for and pride in your work.

Effort and attitude are among the core tenets of all branches of the military. Military personnel are put through rigorous training to instill these values and prepare them for anything that may come their way.

Work ethic is also one of the most important qualities for construction craft professionals. Jobs need to be done and done well, often on deadline, and companies need employees they can rely on.

Sometimes conditions are less than ideal, and sometimes difficulties will arise. Resilience and discipline in tough situations are valuable traits, and the construction industry looks for and rewards professionals who exhibit them. 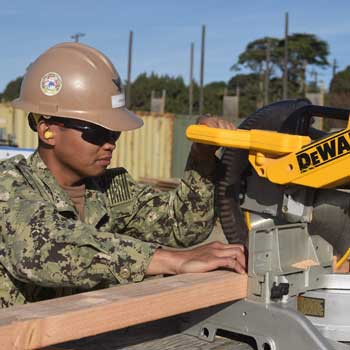 Through their service, veterans learn when to take orders and when to give them.

Understanding both the chain of command and how to lead others becomes increasingly important skills in the military as one rises in the ranks. These skills are also critical for craft professionals as they earn promotions and climb the ladder in the industry.

Going from a private to a corporal to a sergeant isn’t much different than going from a craft laborer to a foreman to a site superintendent. As your role grows with your skills and experience, you take on more responsibility, help make important decisions and act as a leader for others.

A crucial component of leadership in both the military and construction is decision-making and problem-solving in a pinch – especially when lives or livelihoods could be on the line.

Experience in leadership is invaluable. What veterans learned about leading during their time in the military can help prepare them for success in a career in construction.

There are many parallels to draw between the military and construction. The skills and experience veterans learn during their service transition well to working in the skilled crafts.

If you are a veteran searching for a new civilian career, consider construction.